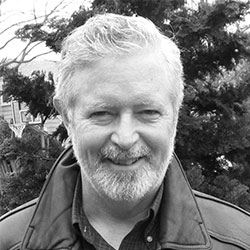 The scholarly work of Kevin LaGrandeur proves that the humanities and sciences have more in common than meets the eye.

LaGrandeur has written many articles and conference presentations on digital culture; on Artificial Intelligence and ethics; and on literature and science. His publications have appeared in journals such as Computers & Texts; Computers and the Humanities; and Science Fiction Studies. He has also published chapters in books such as Eloquent Images: Word and Image in the Age of New Media and Beyond Artificial Intelligence: The Disappearing Human-Machine Divide. He has also published in popular publications such as USA Today and United Press International (UPI).

LaGrandeur has been appointed Fellow of the Institute for Ethics and Emerging Technologies, an international technology think tank. He is also a member of The Modern Language Association, and the Society for Literature, Science, and the Arts. He served on the executive board of the last organization for two years.

An avid outdoorsman, LaGrandeur enjoys skiing, cycling, hiking, camping, fishing, and birdwatching with his wife. He's a stalwart football and soccer fan who has season tickets for the Green Bay (Wisc.) Packers (though he lives in New York), and he traveled to Germany in 2006 to watch the World Cup soccer tournament.

LaGrandeur says, "The best part of my job is engaging with people and ideas from various disciplines at an intimate, forward-thinking institution."